BY STACEY SHEPARD The Record 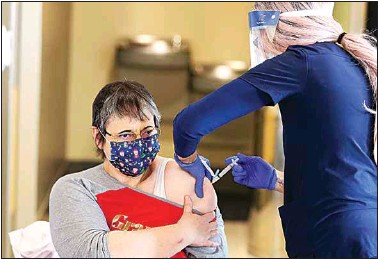 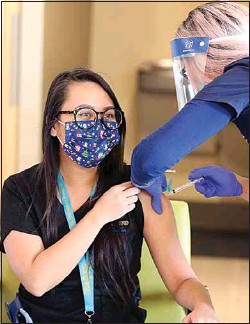 Dr. Carol Stewart called it an early Christmas gift. The head of the medical residency program for Clinica Sierra Vista and some of her more than two dozen residents were among the first in the organization to receive Moderna’s coronavirus vaccine last week on Dec. 23. “The word of the day is hope,” Stewart said, her voice steeped with emotion as she addressed a room of masked Clinica staff, medical residents and media just prior to becoming the first to receive the inoculation at the organization’s Niles Street center. “We’ve waited a long time for that word. It’s been a struggle for many of us.” Stewart and others have been on the front lines of the pandemic locally, assessing suspected and confirmed COVID-19 patients in clinics, nursing homes and local hospitals. The nonprofit safety net health care provider serves some of the county’s poorest communities, which have also been among the most impacted by COVID-19. In particular, clinics in the Arvin and Lamont areas, where many farmworkers live, saw high numbers of cases, according to Olga Meave, Clinica’s chief medical officer who also did her residency with the organization. Meave previously said that close to half of the COVID-19 tests done at the clinics in those two communities were consistently coming back positive. Some Clinica staffers have contracted the virus themselves while others have worried daily about getting it or taking it home to their families. After receiving her injection, medical assistant Elizabeth Bailon strutted into an observation room for those who just received the vaccine, rejoicing with the other residents and staff in there over their shared excitement at gaining some form of protection from the virus. Bailon gave birth to her first child during the pandemic and said it had been scary at times to come to work. Some of her family members have contracted the virus and an aunt in Los Angeles recently died from it. “I feel like this is me protecting my son,” Bailon said of her now 8-month-old baby. In a short address, Clinica’s interim CEO told attendees how happy she was to see the medical staff receiving the vaccine. “These folks have stuck out their necks ... they’ve made sacrifices in being here, even when we were scared and didn’t have a lot of knowledge about what this illness was,” said Stacy Ferreira. One resident who did not receive the vaccine was Claudia Carranza, who fell ill with COVID-19 earlier this month. There was some uncertainty, Carranza said, about getting the vaccine so soon after having the infection so she was advised to wait 90 days. Carranza’s husband, an internal medicine resident at Kern Medical, had previously contracted the virus, she said, and was even sicker than she was. The Peruvian native, who completed her undergraduate degree at UC San Diego and attended medical school in the Caribbean, said she still isn’t sure how she contracted the virus but recalled she had recently worked on a geriatric round and was going into some local nursing homes, which were seeing new cases. Stewart, the doctor who heads up the residency program, said at least six medical residents so far have come down with the virus. Aside from Carranza, she urged everyone to get vaccinated when they can. “For those of you still thinking about it, stop thinking about it. It’s for you, for your coworkers, it’s for your patients, it’s for your families,” she said. “Maybe it’s not perfect but it’s certainly better than what we’ve had so far.”