LA DA has offer no criminal can refuse

Cynthia Zimmer is the elected District Attorney of Kern County. 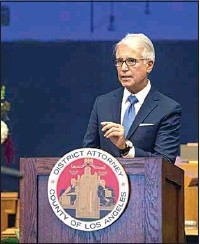 Are you a convicted felon with a history of violent crime? A murderer? Rapist? Child molester? Human trafficker? Drunk driver who kills? Do you take pleasure in using firearms to ratchet up body counts in all types of crimes? Do you think it unfair that your history of violent crimes makes your punishment for new crimes higher? If so, I have an exciting opportunity for you. On Dec. 7, Los Angeles County swore in its newly elected District Attorney George Gascón. Gascón immediately pledged to make Los Angeles a sanctuary for criminals by announcing his refusal to enforce the most basic state laws designed to address serious, violent and repeat offenders. There’s a catch though, his authority only extends to Los Angeles County. Here in Kern County, you’re stuck with me — a district attorney who will strive to enforce laws and demand that crime victims receive justice. Criminals, you really must ask yourselves, why continue living in our county when you can take your criminal activity to Los Angeles, where you will be greeted with open arms? Let me share why relocation of your criminal activity is really in your best interest. First, Gascón has declared he will not allege a defendant’s prior “strike” convictions in new criminal cases — ever. Ironically, on the day he swore an oath to uphold the laws of California, Gascón immediately vowed to break them. Prior strikes are legally required to be alleged by prosecutors. For you criminals, that means that the new LA DA is literally willing to break the law to ensure you don’t face the punishment you deserve! Need more? Consider this: When arrested for felonies like domestic violence, elder abuse, child abuse and rape of an unconscious person, the DA will actively fight in court for your immediate release back onto the street without need to post bail. Who needs a defense attorney when the DA is already on your side! Just “promise to appear” at your next court date and you walk free. Do you really think victims will testify when they know you are free to retaliate and there is little consequence for criminal behavior? Gascón has also proclaimed that he will seek the lowest punishment possible in every case, and will even advocate for early release of already convicted life-inmates. Violent gang members can also sleep easier in LA, knowing that gang crimes will be ignored, as Gascón has decreed that laws targeting gang-related crime will not be enforced. At the same moment that he is releasing criminals from jail with no assurance that they appear in court, Gascón has also declared he will not seek the lawful penalties for those who reoffend while they are released pending trial. When Gascón left his DA position in San Francisco to seek control in LA, the president of the San Francisco Police Officers’ Association issued an ominous warning: “We are praying for the residents of Los Angeles hoping that George Gascón does not do to their city what he did for San Francisco during his tenure; double digit increases in crime… cars broken into by the thousands and neighborhoods ravaged by open air drug markets and crime… We are happy he will be leaving San Francisco but feel he is taking his record of failure to an even larger county where he can cause even more harm to public safety.” In Kern County, the District Attorney’s Office will continue to be an ally to victims and the community in our fight against crime. Gascón has taken the opposite approach. When confronted by the mother of a murder victim who opposed his policies, Gascón replied that she and anyone else who opposed early release of killers were “too uneducated to shut their mouths for once.” Gascón’s contempt toward victims and disregard for the law are designed to benefit criminals at every turn. I pray for victims in LA who are being abandoned by their district attorney and oppose nearly every policy for which Gascón stands. Criminals hoping for Gascón-style treatment in Kern County can stop holding their breath because it’s not going to happen under my watch.