BY SAM MORGEN The Record You can reach Sam Morgen at 661395-7415. You may also follow him on Twitter @smorgenTBC. 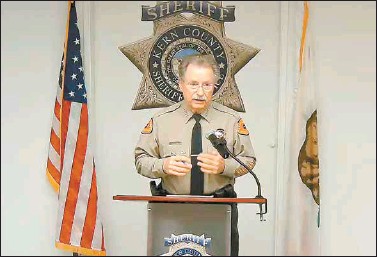 A settlement agreement between the California Department of Justice and the Kern County Sheriff’s Office was met with mixed reactions last week after its announcement. The agreement requires KCSO to enact an extensive list of reforms over the next five years aimed at ensuring the department protects citizens’ constitutional rights and treats individuals with respect and dignity. After a four-year investigation into the Sheriff’s Office, the state DOJ determined the department had engaged in a pattern of constitutional violations involving improper use of force, unreasonable searches and seizures and inadequate management. The DOJ also alleged KCSO violated state law in its use of deadly force against individuals with disabilities, failure to provide equal employment opportunities and its handling of civilian complaints. However, as part of a deal with the county of Kern, the DOJ dropped a civil complaint against the county and the department in exchange for the Sheriff’s Office’s cooperation in enacting the reforms. At 59 pages, the settlement filed in Kern County Superior Court requires more than a dozen changes to the Sheriff’s Office over the next five years, with an independent monitor to ensure those changes take place. The unions representing management and staff of KCSO backed the settlement, with the Kern Law Enforcement Association, which represents deputies, echoing Sheriff Donny Youngblood’s denial that constitutional violations had occurred at the department. “There were allegations made, and we firmly believe and stand behind, that there were no law violations,” said KLEA President Marcus Moncur. He said the union welcomed the settlement with open arms, adding he believed the agreement verifies concerns KLEA has been bringing before the Board of Supervisors for years, especially relating to low staffing levels. “For us and our membership, this is a win for us,” he said. “There are a lot of things that point to a lack of staffing, and I think that anyone or any business can appreciate that if you lack the appropriate or necessary staffing to complete a task, it begins to cause, or has a potential to cause, other problems.” Lt. Kevin Wright, president of the Kern County Sheriff’s Command Association, also spoke favorably of the agreement. “I think everybody is glad that this has finally come to a conclusion and is not just constantly hanging out there,” he said. “This gives us a solid game plan to follow, and I think that that is really our next goal, just to make sure we are compliant with the things that are agreed upon in the document.” Still, David Cohn, managing partner at local law firm Chain Cohn Stiles, criticized the Justice Department for settling with the Sheriff’s Office. “I suppose it’s something to make the attorney general feel good. I don’t think it means anything,” he said. “I don’t think it’s going to have any meaningful impact with respect to how the Kern County Sheriff’s Department handles excessive force issues within the department.” He said his law firm had been responsible for collecting over $20 million in damages against the Sheriff’s Office since Youngblood was first elected, and if continuously settling lawsuits didn’t start to change KCSO conduct, he didn’t feel this new agreement would either. “Do you see any of the political leaders, do you see any of the supervisors saying to the sheriff, ‘we want meaningful reform, we are tired of paying out on these claims?’” he said, commenting on the lack of public statements from local leaders. “It’s business as usual. Nothing is going to change.” But some who have been pushing for change have found hope in the new agreement. “This is a really big deal that this happened and I think that overall, the use of force policy reform overall is great,” said Stephanie Padilla, a staff attorney at the American Civil Liberties Union Foundation of Southern California. She described herself as happy with the DOJ’s actions, but cautioned against the expectation that KCSO will alter its culture quickly. “I don’t want to minimize the fact that there are various patterns and practices — a lot of them honestly are racist — that are embedded within KCSO that will take a while to root out,” she said. “This is not going to be an overnight, ‘we’ve entered into this consent decree and now all of a sudden things are going to be better in the next year or two.’ There is going to be this long road ahead to ensure we are going to see the change we want to see.”