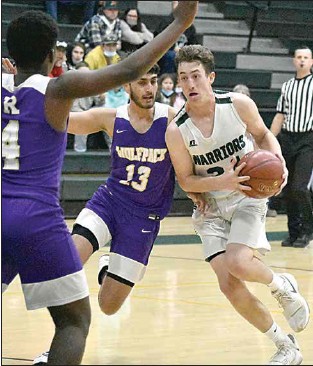 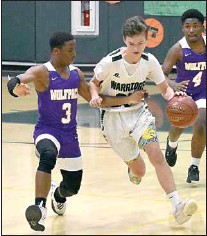 The end result was not what they wanted. However, the Warriors proved that they could hang with one of the top-tier teams in Kern County after a narrow 56-52 loss to Ridgeview in the South Yosemite League opener last week at home. Turtle Thomson led the way for Tehachapi (4-6; 0-1 SYL) in the competitive loss, registering a double-double with a team-high 19 points and 10 rebounds. Also performing well were Wyatt Baldwin and Evan Anderson, who both had nine points each. Other scorers were Matt Jones with five points, Cameron VanOstrand with four points, and Iven Sandholdt and Ryan Mitchell each with a basket. The Warriors were leading the Wolfpack at halftime 28-21 thanks to a strong defensive performance in the second quarter, outscoring Ridgeview 13-2 in the period. The Wolfpack countered in the second half by outscoring the Warriors 19-11 in the third quarter and 1613 in the fourth quarter to pull out the win. Ridgeview (9-7; 1-0 SYL) came into the game with an impressive pre-season tournament championship in the Garces Elite-Eight Challenge the prior week, defeating Garces, Santa Maria-Pioneer Valley and Fresno-Roosevelt. In the underclassmen games against the Wolfpack, the junior varsity fell 45-38 and the freshmen won, 28-21. Karson Tiewater had 11 points, Anthony Cerbantez had 10 points, and Jason Garcia and Samuel Mercado each had six points for the Braves in the loss. In the freshman contest, Devin Jackson (seven points, six rebounds, five steals), Carter Kolesar (seven points, five rebounds), Adrian Pina (six rebounds) and Kaidon Hagerty (four steals) were the top performers. Mountain Basketball did not play their second league contest last Thursday at Independence due to the Falcons entering health and safety protocols. As of last Friday, the game has been deemed a non-contest. However, per the THS athletic department, there is a possibility the game could be made up at a later date during the regular season. The Warriors will only have one game this week, a non-league match-up with Garces in Bakersfield this Friday. Tip-off will be at 6:30 p.m. for varsity, 5:15 p.m. for junior varsity, and 4 p.m. for frosh.