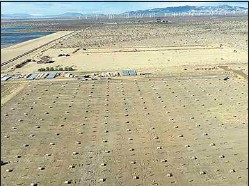 Construction has begun five miles west of Rosamond on a 100-megawatt photovoltaic solar project called Rabbitbrush Solar, which will come with a battery component storing 50 megawatt-hours of electricity. As the latest large-scale renewable energy project in eastern Kern, the Canadian-backed development is expected to create 300 union construction jobs at its peak. After that it is expected to generate enough power to run 40,000 homes, essentially removing 48,000 metric tons of carbon dioxide per year — the equivalent of taking 10,500 gasoline-powered cars off the road. Two companies have signed 15-year agreements to buy energy from the project: Central Coast Community Energy and Silicon Valley Clean Energy. Both are community-choice aggregation providers that sell clean energy to individual customers. Developer Leeward Renewable Energy said it chose to build in Kern because of the area’s consistent sunlight and flat land. It also credited the availability of electrical transmission lines and other infrastructure nearby, as well as the area’s experienced workforce and the county’s leadership in renewable-energy development. Work began in October at the site near Willow Springs. Construction is scheduled to finish in July and operations are set to begin in August. Kern’s top planner and lead energy permitting official, Lorelei Oviatt, on Friday described Rabbitbrush as an infill project in an area that’s already home to extensive solar and wind development. She said the county conducted an environmental review of the project and found nothing particularly controversial about it. At least half the jobs generated during construction must be local hires, Oviatt said. She noted the project makes good sense in that battery storage works best near the source of power generation. She also made reference to a simmering conflict between Kern and state government over energy permitting. Gov. Gavin Newsom’s administration has clamped down on oil permitting — a significant source of local jobs and government revenue — even as Sacramento has extended an exemption that denies Kern millions of dollars per year in property tax receipts. “Once again this (Rabbitbrush project) is Kern County’s contribution to California, and we believe that we have a solution for local revenues for right now, but we still continue to advocate for an adjustment to the solar tax exclusion,” Oviatt said. Leeward reports having 21 renewable energy facilities in nine states with generation capacity totaling about 2,000 megawatts. It says it is working on more than 100 new wind, solar and energy storage projects offering 17 gigawatts of power. Leeward is owned by Canadian pension company OMERS Infrastructure, which reports having $114 billion in net assets.