Mountain Football came into the game against Independence having to overcome some mid-season adversity. The challenges included key Warrior players excluded from athletic participation due to COVID-19 evaluation protocols, coming off a long two-week layoff from their last contest played and a hyped opponent that was playing in their homecoming. In the end, it was too much for Tehachapi (2-4; 0-1 SYL) to overcome in a 21-6 loss to Independence Friday night in Bakersfield. The non-participation of a handful of Tehachapi athletes was due to CDC Guidelines for mandatory quarantine procedures implemented by Tehachapi Unified School District for students exposed to COVID-19. While in quarantine, if the affected students test negative for COVID-19 on two separate tests, there is the potential that they could return to extracurricular football activity as soon as this week. Coupled with the COVID-19 protocol, the Warriors were coming off a long layoff from football action, with Ridgeview electing to not participate in Tehachapi’s homecoming game on Oct. 1 due to their own COVID-19 issues. Overall, 23 Warriors suited up against Independence and gave maximum effort, led by Sam Orellana, who had 115 yards on 16 carries and a touchdown. Orellana’s score was a 13yard run on a fourth-down play with just over five minutes remaining in the third quarter, where he broke through multiple Falcon would-be tacklers near the line of scrimmage to reach the endzone. Other offensive standouts included AJ Anderson with 34 yards on 10 carries and Ashton Geddes recording a 20-yard reception from quarterback Jacob Root. Defensively, Wyatt Richie swarmed all over the field at his linebacker position, ending the night with a season-high 18 tackles and also recording a sack and fumble recovery. Other defensive leaders included Michael Jones with nine tackles, Anderson with nine tackles and a sack, Sebastian Peel with six tackles, Ethan Reese and Ryan Wilson with five tackles apiece, Christian Morse with four tackles and Tylar Love with an interception. On special teams, Love led the team with 80 yards on kickoff returns. Working with TUSD administration, the Warriors are hoping to be at full strength this week against a talented Bakersfield Christian opponent, who will be hosting the Warriors in their homecoming game. The Eagles are currently undefeated in league play after coming off a 49-19 victory over West. Bakersfield Christian is coached by Darren Carr, brother of former first overall draft pick David Carr and current Las Vegas Raiders quarterback Derek Carr. Both Carr brothers assist their brother Darren as coaches on the team. Kickoff against Bakersfield Christian will be at 7:30 p.m. this Friday night in Bakersfield. FROSH-SOPH WARRIORS RECORD IMPRESSIVE WIN OVER FALCONS The Warriors had a strong showing in the underclassmen game, racking up 405 yards of total offense in a 41-24 victory over Independence. Levi Hart led the way for Tehachapi (5-2; 2-0 SYL) with 223 yards rushing on 24 carries and four touchdowns. Other leaders included Karson Tiewater with 89 yards rushing and two touchdowns and Adrian Pina with 61 yards rushing. Anthony Cerbantez also had three completions at quarterback, connecting with Cyler Hoofard with two receptions for 37 yards and Leonell Gonzalez with a reception for 16 yards. Defensively, Pina had 11 tackles, a fumble recovery and a caused fumble. Other standouts included Tiewater with six tackles and a pass deflection, Liddon Scott with four tackles, two hurries and a caused fumble, Gonzalez with four tackles, Hart with four tackles and Johnny Estrada with a fumble recovery and caused fumble. Carter Kolesar, Alan Castaneda, Kenneth Pitt and Raul Navarro also had three tackles each. On special teams, Kolesar connected on five PATs. Tehachapi will take on Bakersfield Christian in another league contest this week in Bakersfield. Kickoff will be at 5 p.m. 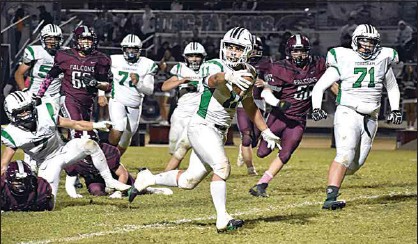